Break into Screen Acting More Quickly
Interview with professional actor Nimo Gandhi
Learn how he built an incredible list of screen credits in a short amount of time. 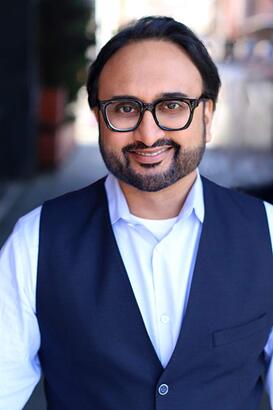 Most actors believe that the standard path to feature film work and recurring television roles starts in theater. But Nimo Gandhi breaks the mold because he jumped into film and television right away, without spending years in theater. He was able to build up a long list of credits that now makes it easier for him to get called in for auditions consistently. What I love most about this interview is the outside-the-box thinking Nimo used to move his career forward at a faster speed than would be expected.

​Nimo's Bio:
Nimo Gandhi is an American television and film actor. Recent credits include Blacklist (NBC), Unbreakable Kimmy Schmidt (NBC). Law and Order: SVU (NBC), The Sinner (USA), Donny! (USA), Mysteries of Laura (NBC), Louie (FX), Guy Code (MTV), and Sharknado 2 (feature). Nimo was born in Fort Wayne, IN, where his folks immigrated to from Mumbai, India. He is a graduate of Purdue University with a BS in Industrial Engineering, going on to attend The William Esper Studio's two-year conservatory program under the direction of Terry Knickerbocker. In addition, he has studied with Wynn Handman, Matt Newton, Anthony Grasso, and Vance Barber. Nimo also writes, produces and releases independent film and music video content. He is passionate about telling stories close to his unique first generation upbringing. Many of his stories are told through song, as he is a professional singer songwriter under the stage name, "Gandhi." He continues to release new music.

Check Nimo out at:
www.nimogandhi.com